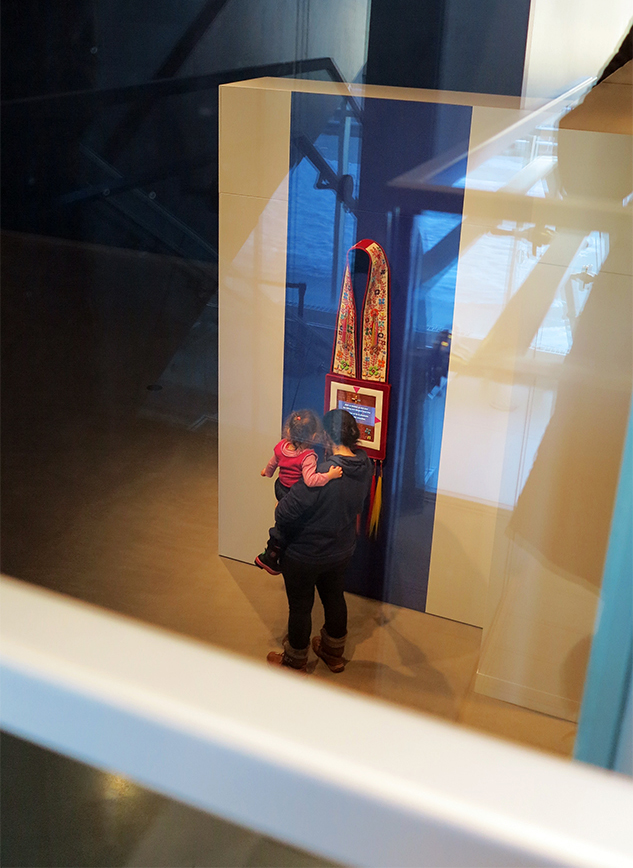 This intriguing and interactive exhibition celebrating the work of Ottawa artist Juan Geuer comes to a close this weekend, August 17 and 18. Curated by Caroline Seck Langill, this show positions Geuer’s work “in dialogue with artists with whom he either collaborated, influenced, or worked with in parallel, from Michael Snow to Catherine Richards.” (read more)

One of the artists is client Barry Ace www.barryacearts.com.  Barry’s Bandolier for Alain Brosseau is a poignant piece, completed in 2017, that honours the life of Alain Brosseau, a man who was targeted, then murdered, in a gay bashing incident in Ottawa in 1989. As Barry relates in the work:

In the artsfile article Science of art is art of science in Juan Geuer retrospective at Ottawa Art Gallery (Peter Simpson, April 24, 2019) Barry’s work is assumed as being influenced by Geuer.

Ottawa artist Barry Ace weaves Geuer’s technological influence into the traditional art of his Anishinaabe culture. Ace’s Bandolier for Alain Brosseau is richly stitched with beaded motifs, and on closer inspection the flowers and other decorations are revealed as actual bits of circuitry.

Although it is not infact the case that Barry was influenced by Juan, he has worked in tandem in similar ways. Both artists employ electrical and digital components to animate their work. Because of this, when one is in the exhibition space and observing the audience that walks through, it is clear that this strategy is a powerful one in getting people to draw closer to the work investing more than a mere minute. In Bandolier for Alain Brosseau, a motion activated digital tablet embedded in the centre of the bag becomes the portal through which the story of Alain’s tragic death is conveyed. I have watched people pause to watch and read through the entire set of slides. In an ‘insta’ world, this type of attention given to a work is rare, an almost impossible feat. Barry’s technique of embedded tablets succeeds as an effective way of commemorating and conveying the difficult histories that are part of our urban spaces.

Canadian artist Juan Geuer’s groundbreaking work sits in the threshold between science and art. It bridges the human condition, in all its various states, and the carbon-based ecosystems and oxygenated atmospheres upon which we depend.

The exhibition Carbon + Light celebrates this artist’s significant legacy as a fearless truth seeker. Through his inventive approach to installation, he pointed out the onset of the Anthropocene long before the term emerged to denote the geological period in which we now find ourselves embedded. Here, Geuer’s work will be in dialogue with artists with whom he either collaborated, influenced, or worked with in parallel, from Michael Snow to Catherine Richards.

The exhibition will also showcase the importance of Ottawa as the site within which Geuer’s surprising practice emerged, suggesting that time and location were instrumental to his ability to develop his unique investigation.

OAG is open from 9 am to 9 pm seven days a week, including this Saturday and Sunday. For more information visit the OAG website.