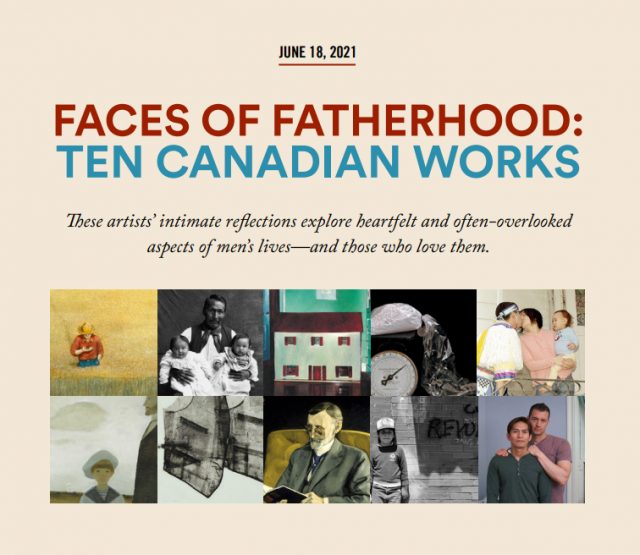 In honour of Father’s Day this Sunday, we’re looking at artists who have created works about familial relationships that are at once deeply personal and also connected to broader issues of identity.

For Father’s Day 2021 the Art Canada Institute (ACI) featured several artists work on the subject of fatherhood, including Jeff Thomas (www.jeff-thomas.ca) for their publication FACES OF FATHERHOOD: TEN CANADIAN WORKS focusing on artists “intimate reflections [that] explore heartfelt and often-overlooked aspects of men’s lives—and those who love them.”

For Jeff, the work showcased is an early portrait of his son Bear from the Beart Portrait Series, Cultural Revolution.

From the ACI publication:

Part of Ottawa-based Iroquois artist Jeff Thomas’s (b.1956) portrait series of his son from 1984, this photograph shows seven-year-old Bear wearing a hat with a reproduction of an Edward Curtis portrait of Two Moons, a respected Cheyenne leader who took part in the Battle of Little Bighorn and other campaigns against the United States Army. “When I saw the print, I saw myself as a young boy and remembered the fractured relationship I had with my father,” Thomas has remarked of the work. It is part of a series that explores the loss of male role models by using Bear as a marker of Indian-ness in sites where it does not exist. For Thomas, this first photograph “set in motion a new way of looking at the city and, like the graffiti, my revolution was against the invisible urban Iroquois presence.”

More about the ACI:

Launched in 2013, the Art Canada Institute is the only national institution whose mandate is to promote the study of an inclusive multi-vocal Canadian art history to as broad an audience as possible, in both English and French, within Canada and internationally. The ACI works with more than fifty of Canada’s leading art historians, curators, and visual culture experts who are dedicated to the creation of authoritative original content on the people, themes, and topics that have defined Canadian art history.

Before the ACI, accessible and authoritative information on the lives and work of Canadian visual artists was hard to find. We are creating a central digital resource to tell the world about Canada’s most important works of art and where they are located. By functioning as an online art museum, a digital library, and an interactive Canadian art encyclopedia, the ACI is an indispensable resource on Canada’s visual heritage.

Based at Massey College at the University of Toronto, the ACI is a not-for-profit educational organization and a registered Canadian charity. (read more)