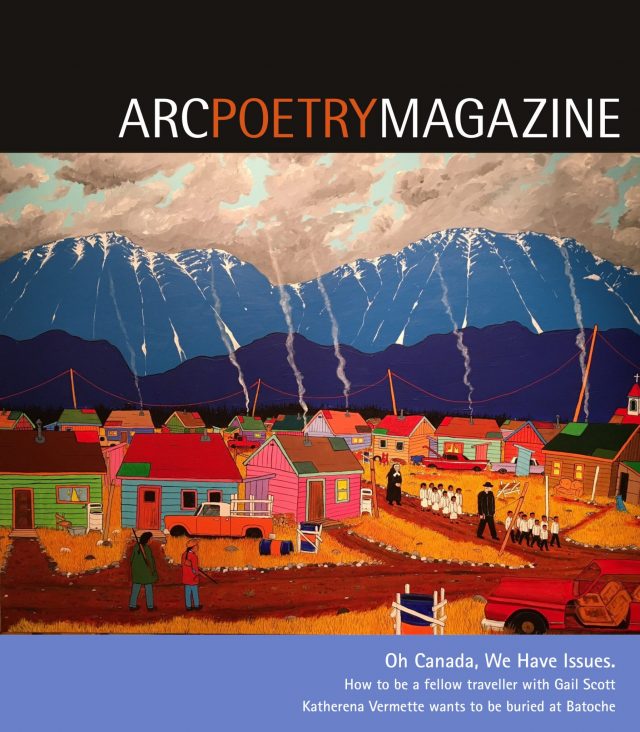 Arc Poetry Magazine is a local magazine that combines the text of poetry with the visuals of artists’ work. The combination makes for a beautiful collection. For the Fall 2017 edition “in recognition of 150 years of post-Confederation, Arc has collected an issue of poems concerned with Reconciliation, Decolonization, and Nation(s).”

Each edition is guest edited. This edition is edited by writer Armand Garnet Ruffo a “National Scholar in Indigenous Literature” (view Norval Morrisseau: Man Changing into Thunderbird). Ruffo has gathered together a “wide range of established and award-winning poets as well as newer rising voices.” He writes:

As Canada moves deeper into the twenty-first century we have to wonder what kind of country it aspires to be? Is it content to turn a blind eye while prospering at the expense of disenfranchised peoples? … what will it take for Canadians to remove the blinders they have conveniently worn since the founding of this country?

as well as 3 local Indigenous artists:

Along with Jim Logan’s lush but poignant paintings, the photographs of Rosalie Favell and the beadwork of Barry Ace speak to vitality of cultural legacy. Rosalie’s images include the series she produced that communicate the longing she has for her Grandmother and her joyful and strong presence in her life. The images of Barry’s work include the recent acquisition of the National Gallery of Canada, Healing Dance (2013), now on view as part of the NGC’s Canadian Biennial.

Arc Poetry Magazine is available at various Ottawa book stores. For more information on how to subscribe click here.

CANADA AT 150 by Armand Garnet Ruffo

Canada’s 150th birthday arrived
with the expected fanfare
and I decided to stay home.
I watched the clouds gather
over Parliament Hill,
and sure enough the rain came down
and drenched the thousands of patriotic souls
who had gathered there to celebrate the day.
It was a sad affair to watch
all those smiling faces on TV
huddled under their red and white umbrellas.
One couple went so far as to say the soggy weather
made their experience all the more worthwhile.
Though I didn’t quite understand what they meant,
I understood the blush of sentiment
smeared across their faces like a slice of birthday cake.
I wanted to celebrate believe me.
What’s wrong with you?
I said, going to the fridge
to see what might be in there to eat.
There wasn’t much: a shrivelled piece of fruit,
a grey slab of meat,
a stale bag of bread,
a carton of sour milk.
Maybe I had expecting too much,
I thought. Yes, that had to be it.
I looked outside, but the rain
hadn’t let up.